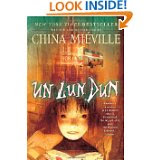 Un Lun Dun: China Mieville: Normally, I don't comment on books before I finish them, but I just wanted to say a few things about China Mieville's foray into YA lit. It reminds me very much, so far, of Neil Gaiman's Neverwhere, with the idea of a London that exists alongside and unknown to the London of our reality.

In Mieville's story, one girl, Zanna, is the Chosen One -- what she's chosen for, she has no clue about, but she first realizes that something is watching her and and another malevolent force is out to hurt her when she's at school with her friends. After an accident that is clearly somehow related to her, she and her friend, Deeba (who is the only one to stick by her after the accident) stumble into Un Lun Dun, where they begin their journey to find out why and for what Zanna is chosen.

Un Lun Dun contains themes that are found in many Mieville tales -- the idea that an entire reality can exist alongside another with the citizens of at least one of those realities completely ignoring it is especially realized in his novel, The City and the City. His take on this theme for a YA audience is so far enjoyable and appropriate for that audience, while not being dumbed down in the least. I first discovered Mieville when I picked up The City and the City for its lovely cover. I've continued to read his novels and short stories and he has yet to disappoint me. Although Un Lun Dun is written for a younger audience, older readers can also enjoy this story of an alternate London where milk cartons can be pets.
Posted by Kathy at 2:30 AM No comments: 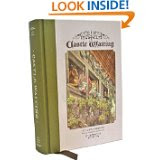 Castle Waiting: Linda Medley: This image is from volume 1 but I've read volume 2 as well and like them both. According to Wikipedia, Medley is currently taking a break from the Castle Waiting series, and I think that's a shame. I love the mix of fairytale and modern touches found in these books.

In volume 1, Medley first retells the Sleeping Beauty story and you see the castle become surrounded by brambles. A century later, Sleeping Beauty's castle has first been abandoned and then taken over by a motley crew of interesting characters -- Simple Simon and his mother; Lady Jain and her odd but cute baby; Sister Peace (a bearded nun), and Rackham (a stork who acts as steward in the castle.) Sleeping Beauty's ladies-in-waiting also live at the castle, which seems to exist as a haven for those who need it.

Instead of retelling fairytales, Castle Waiting provides the reader with an insight into the daily lives of the characters who inhabit the castle. There's also backstory for Lady Jain, who has fled her husband and is in search of a place to stay, and for Sister Peace, who started out as the daughter of a pub owner and, when she began to exhibit facial hair, left to join the circus, and ended up as a nun in a convent of similarly bearded women. I liked both storylines and I liked both volumes of this graphic novel -- although they are both over 300 pages, they take no time at all to read. I just wish Linda Medley hadn't taken a break from the story because volume two just ends -- period -- at what seems to be the start of a new storyline involving dwarves (here called Hammerlings).
Posted by Kathy at 3:10 PM No comments: 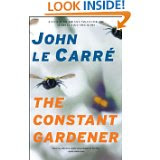 The Constant Gardener: John Le Carre: It's rare that I like a movie more than I enjoy a book -- very rare. But with The Constant Gardener, that appears to be the case. It's not that I didn't like the book; I did. I just didn't love it, and I loved the movie. But le Carre's book was much more confusing than the movie was and more didactic as well. The major plot regarding the murder of Tessa Quayle and how it may or may not be traced back to a pharmaceutical giant and its rush to market of a drug for TB, is just too preachy. There are some subplots that didn't need to be present at all -- all the business with Sandy (who wanted to be High Commissioner in Kenya) -- much of it was superfluous. And although Gloria, Sandy's wife, was kind of funny, we didn't need so much of her. Ghita's trip to the area where Tessa was killed didn't even really need Ghita at all -- someone else could have done it -- it could have been part of Justin's journey to find out what happened to his wife. The confrontation with Bernard Pellegrin (played by Bill Nighy in the movie) didn't feel as emotionally satisfying in the book as it did in the movie. All in all, the book ranks about average for me.
Posted by Kathy at 8:38 PM No comments:

A Feast for Crows 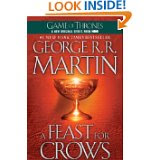 A Feast for Crows: George R. R. Martin: I loved the first three books in the Song of Ice and Fire series, but this one is by far my least favorite. By far. Characters that we have come to expect to hear from are not present -- no Tyrion Lannister, no Dany, no Jon Snow. Martin says he felt he had to divide this book from A Dance With Dragons because the story was just getting too unwieldy. I feel that if he had had proper editing, the relevant chapters from this book and the relevant ones from DWD could have been combined into one book about the length of A Dance With Dragons without losing anything essential from the story (having read DWD, I know there's far too much pointless meandering in that book.) As it is, we follow Brienne, the Maid of Tarth, as she wanders here and wanders there looking for Sansa Stark. We get much too much of a peek into Cersei's mind as she descends into paranoia and makes stupider and stupider decisions. What's done with Sam Tarly in this book is nowhere near as interesting as it could have been and there was far too much of this uninteresting story -- I'm tired of hearing Sam call himself a craven when it's clear he's anything but. A lot of this was just useless. And Arya -- I just don't care about her story in this book -- she seems more of an "eye on Braavos" character than anything else. I now know all about Braavos but less and less about Arya, and what's worse is that I just don't really care. She's always been one of my favorite characters, so to be bored by her was disappointing, to say the least. I'm not sure how I feel about the chapters set in Dorne -- interesting enough but too much of them. The only thing that I really loved about A Feast for Crows was the development of Jaime Lannister's character; he becomes much more interesting and unpredictable in his behavior. And he's surprisingly likable -- sort of. I'm just thankful that I came to the series only because I saw HBO's Game of Thrones; if I'd had to wait and wait for the latest book and then got this, I would have been very unhappy. As it is, I was just mostly bored. 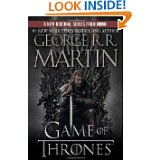 A Game of Thrones: George R. R. Martin: I came late to this series, discovering it through the HBO series. Because Game of Thrones won't be back until 2012 and I missed that world, I decided to start reading the books.

I don't think I've ever seen such a faithful adaption of a book anywhere. I think I could have started reading the second book without having read this first one because the HBO series dealt with the plots and characters from this book in much the same way Martin does. That said, I'm glad I read A Game of Thrones as I feel it gave me further insight into the motivation of each character. I ended up feeling sorrier for Sansa in the book than I did in the series; she was younger in the book (most of the characters are) and more innocent and trusting.

Arya is still my favorite and I look forward to reading more about her exploits in A Clash of Kings. Running a close second to Arya is Tyrion Lannister -- the Imp. I don't know if that's because of Peter Dinklage's portrayal of him in the series or because I just would have gravitated toward his brand of snarkiness anyway; probably a little of both.
Posted by Kathy at 10:21 AM No comments: 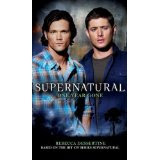 Supernatural: One Year Gone: Rebecca Dessertine: Given that this is a novel based on characters in a tv show I watch, I probably shouldn't be as bothered by this book as I am. However, it's been awhile since I read it and the sheer badness of it still appalls me. The funny thing is, it had all kinds of things to appeal to me:

But in the end, none of that meant anything; the book was just plain bad. The characterization was thin -- I know I am and should be familiar with these characters from the show, but please! Give them some personality; don't depend so much on my familiarity with them. I could barely distinguish Sam from Dean, nor was it clear to me that Sam was Soulless Sam -- he could have been anybody given that he was so one dimensional.

And the plot was all over the place. It's as if Dessertine decided she'd throw in all kinds of supernatural creatures -- ghosts (pirate ones at that), a ship that's just a museum that suddenly drifts out to sea while Ben and Dean are touring it, witches. The witch story was the strongest, why not just stick with it? I expected more of a book endorsed by Kripke and written by his assistant. Apparently, I shouldn't have. 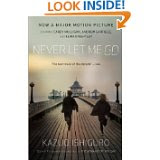 Never Let Me Go: Kazuo Ishiguro: It's hard to say anything about this book's plot without revealing details that are best discovered by the reader. Suffice it to say that when we meet the narrator, Kathy, she is 31 and looking back on her life and friendships at Hailsham -- a school for special students. The students are so special that even they don't really realize the nature of that specialness; they are, as one of the teachers says, "told and not told" about it, so they don't have a real understanding of their purpose. When they do find out, it's brutal. Kathy's narration, with its passive and calm tone, acts as a counterpoint to the brutality and horror of the truth that Kathy, Ruth and Tommy will discover.

Ishiguro's style is literary in the best sense of the word; Never Let Me Go is about more than just friendship and loss -- compassion and forgiveness. Its themes cover the nature of humanity and society, all in an intimate story with only three main characters. I liked this book when I first read it, but it stuck with me and I keep thinking about it, turning over what it means in my mind. Now I love it. It's the best book I've read this year.
Posted by Kathy at 2:47 AM 2 comments: 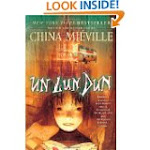 Find Books in a Library Near You